“sushi” in a bowl 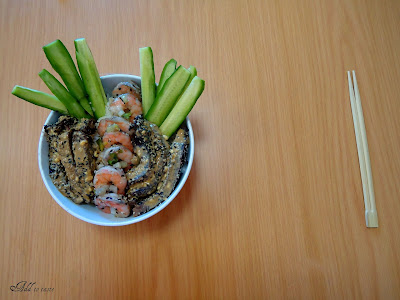 Monday afternoon, while innocently sitting at work, handing out sushi advice to a friend I received an SMS from the fishmonger across the road. Now before you think there is something fishy going on, I only get them when the tuna comes in. How could I resist, fresh yellowfin tuna (orange on the SASSI list) and after spending so much time explaining to my friend the steps to perfect sushi I had to get it.

Only problem was that it was monday and I am sorry to break the news to you but FISH count as MEAT. When I got home with my tuna I suddenly got paranoid about whether it would stay fresh enough in the fridge to be eaten raw the next day so I decided that marinating was the way to go. I cut 2 steaks from the piece I had and marinaded them in the fridge until the next evening.

Still the sushi idea didn’t want to leave so I got to making the rice. however, by the time TheHusband was done with work it was 10pm (I had to go fetch him) and the last thing I wanted to do was roll sushi. So I stopped off at woolies and grabbed some prawns, then fetched TheHusband and hurried home. I coated my tuna in sesame seeds and seared it, stir-fried the prawns with some garlic and spring onions and served it all on a bed of chilled sushi rice with a soya and wasabi mayo sauce.

What to do:
Mix all the wet ingredients together making sure the hoisin is dissolved well. Place the tuna steaks in and leave for as long as possible (mine were in there for longer than 24hours). Heat a frying pan nice and hot. Mix your sesame seeds together and coat your steaks on both sides. Pop in the hot pan for about a minute each side (remember SEARED, not COOKED) then remove and allow to rest for a minute or 2 (I stir-fried the prawns in that time). Slice the steaks into chopstick managable sizes 🙂

This site uses Akismet to reduce spam. Learn how your comment data is processed.